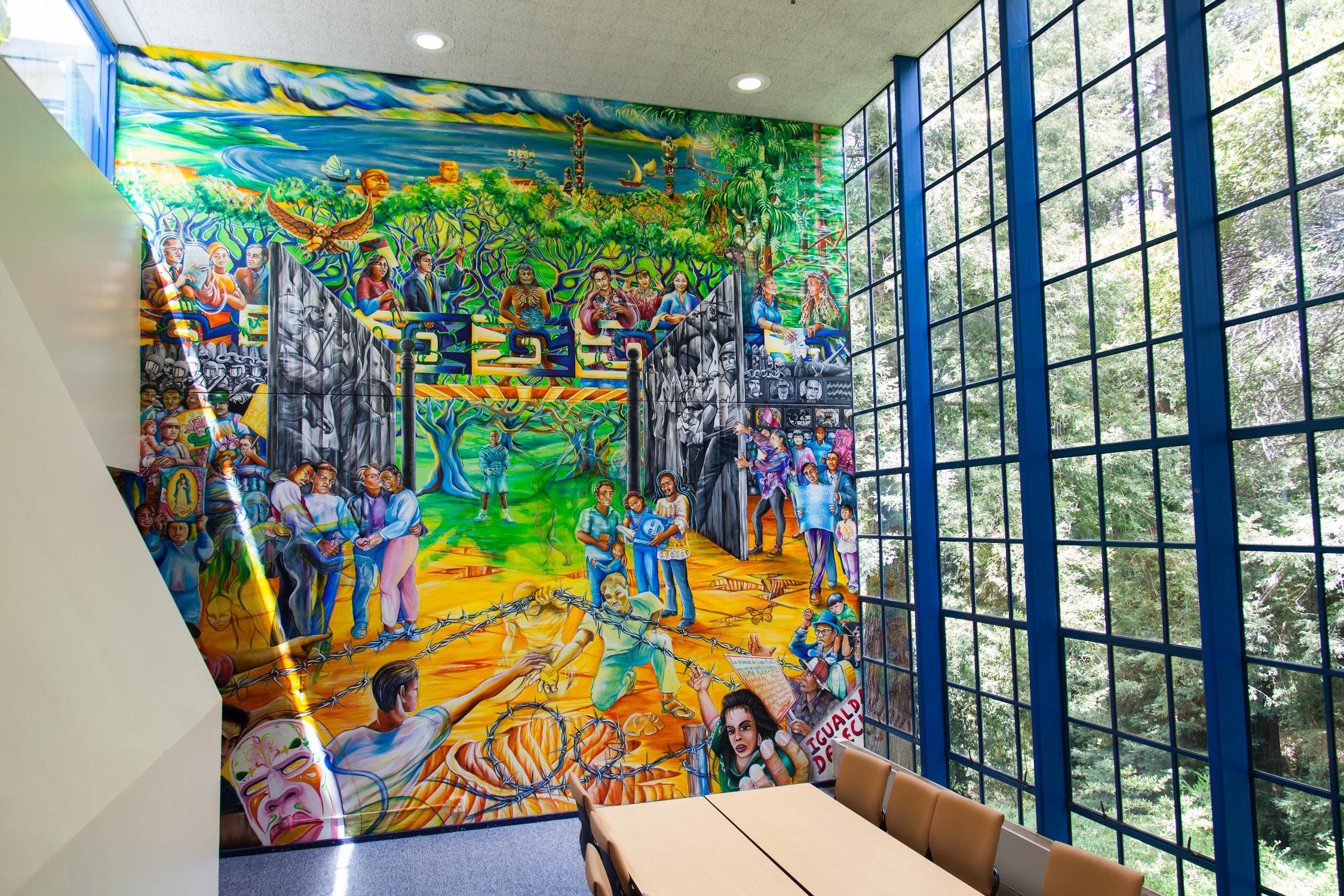 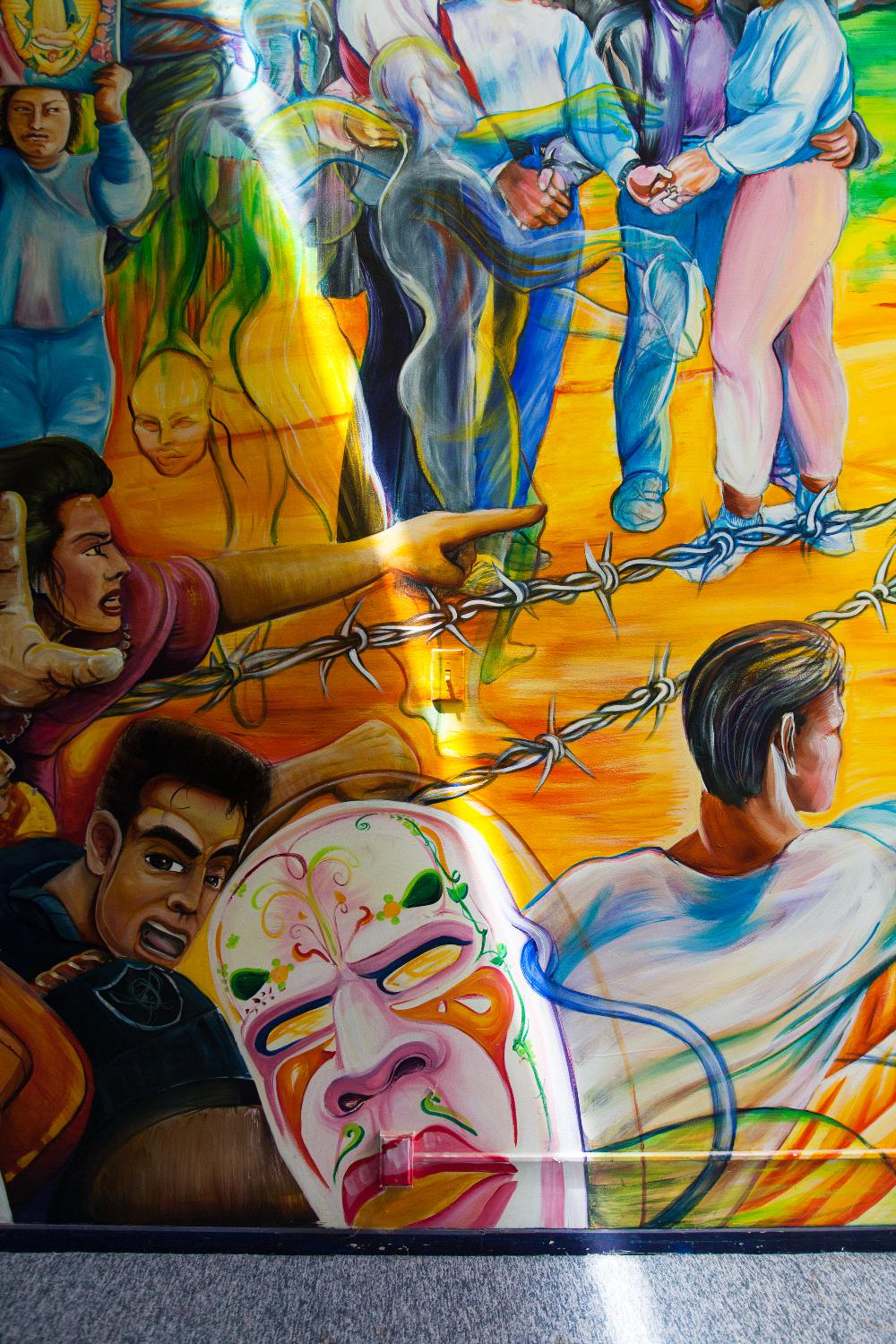 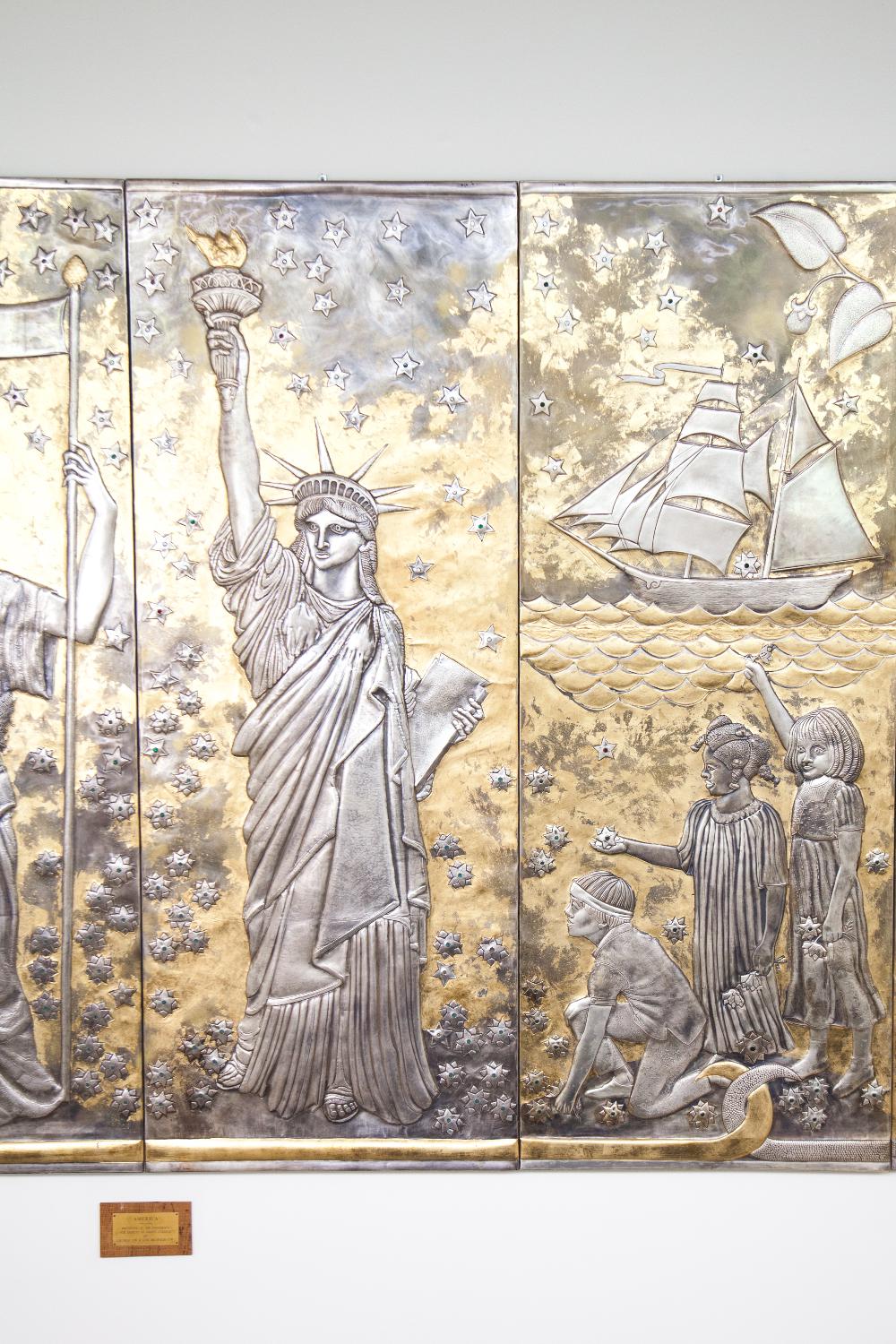 I always ask students what they see in the mural. They always point out the gates of education … the various figures wrestling to keep the gates open and others struggling to even reach those gates.”

In Conversation With Kimberly Lau

At UC Santa Cruz, there are 10 residential colleges. Each college has a theme, and Oakes’ theme is social justice and communication across diversity. This reflects Oakes’ commitment to the representation and support of students from historically disadvantaged groups. I love this mural because it speaks to Oakes’ theme and commitments, both in its origin story and in how those issues are represented within the mural.

The mural was painted as a reaction to an artwork that is in the stairwell of this same building. That work depicts European aristocracy triumphantly coming to the New World. When that artwork was donated to the college, it stirred up controversy with the students. Don Rothman, who was the Oakes College provost at the time, decided to have students create a collective response to it.

Juana Alicia, a renowned muralist based in San Francisco, worked with students to plan and paint a mural that responded to the colonialist message of the other artwork by reflecting the liberation struggles and movements that are important to the students of Oakes College. The mural, titled La promesa de Loma Prieta: Que no se repita la historia (The promise of Loma Prieta: That history not repeat itself) after the ’89 earthquake, was undertaken in 1991-92.

The mural is wonderful as a piece of art in its own right, but it is particularly important to me for teaching. When I was provost of Oakes, I would regularly give a first lecture to all the incoming students, and I would use different photos of details of the mural to anchor certain parts of my lecture. The lecture was about the emerging privatization of education and linked privatization to policies around testing and no-child-left behind and the resulting unequal access to education. Through the students’ experiences with education, we thought about how even at a public university we see the real effects of this kind of privatization. I became provost in 2008, right around the first big budget crisis for the UC, so these were, and continue to be, urgent and timely things to think about.

I often started these lectures with a slide of a detail that shows a young man holding a sign that says ‘Education is our right’ and have the students talk about right to education versus privilege. And, I always asked students what they see in the mural. One of the first things they always pointed out is the central black and white component. This is a representation is of the gates of education. On these gates you can see all the colonial, corporate, and police state forces that have made access to education difficult and that have disproportionately affected people of color. Then, you have the various figures wresting open and keeping open the gates of education and the ghost-like figures, the barbed wire, and other images that evoke border crossing that represent the continued struggle to reach those gates. The struggle of the ghost-like figures helps us think about how generations of students and generations of activists have made education accessible for students like our own.

I framed this lecture around what it means to be part of a community of scholars comprised of faculty, students, activists and staff. I had a series of questions that developed through the lecture: What is the responsibility of being a member of a college where the mission is social justice in a moment when we have an extreme budget crisis and pushback against the expansions of education? What do you think is owed to you as a member of that community? What do you believe you owe to that imagined community in return? I wanted to help students develop a framework to think about social actions and activisms, the campus shutdowns, various protests, marches on Sacramento, etc, that happen around the budget crisis and the privatization of education and their own place within them. I wanted them to feel empowered to participate and to understand these actions within the legacy they are entering in to with Oakes. But, I also want them to feel comfortable not following these routes but imagining other kinds of activisms.

So, I talk about the figures on top of the mural. Those figures are the namesakes of the college. When the college was first built, the students collectively decided who the buildings would be named after. I explain all of the figures represented in the mural and we talk about the activisms they took part in and the histories of struggle they represent, whether we are thinking about Malcolm X and Betty Shabazz, Harvey Milk, Dolores Huerta, Steven Biko, Angela Davis (a former Oakes Fellow and UC Santa Cruz Professor Emerita,) Frida Kahlo, or any of the other figures shown here. Through the mural, I try to contextualize for students these different kinds of civil rights movements, the different strategies and kinds of histories of apartheid struggles, LBGTQ movements, Chicano/a, Latino/a, African America, Asian movements, etc. We see a lot of different values and ideals the college stands for, so I find it powerful and meaningful. It becomes a way to get students to think about how the values we stand for can be implemented in an everyday way and how we can talk to each other across differences with the understanding that we might not change someone’s mind but we can still have a conversation.